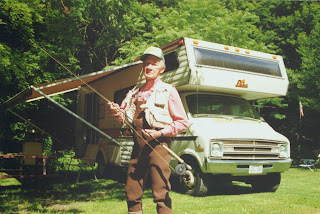 Leon Chandler was born on a farm in Missouri in 1922 and arrived in Cortland, New York during the summer of 1941 on a greyhound bus, with all of his worldly possessions in a cardboard suitcase. He came to visit the family of a cousin and never left, finding work in the furniture department at Montgomery Ward until he answered a newspaper ad and joined the Cortland Line Co on December 12, 1941 - five days following Pearl Harbor. After serving in the Signal Corps in the Philippines and New Guinea during World War II, Chandler returned to Cortland Line and worked his way up to the sales department. He soon became a fixture at the trade shows that were gaining popularity in the sporting goods industry at the time and as his profile as a presenter and teacher grew, the U.S. Department of Commerce approached him to teach fishing (not just on the fly- there is one story of using a bait caster rod to snap cigarettes out of people’s mouths) to people in foreign countries in hopes of raising awareness of American angling products and promoting the American model of fisheries management. He traveled from Poland to Chile and all around the world, bringing the fishing experience to the most remote places. While his travels earned him the moniker of “fly fishing ambassador to the world” Chandler made key contributions to the fly fishing community at home as well. He became Vice President of the Cortland Line Company, ushering in some of the most important and lasting innovations of the 20th century. In 1953 the Cortland Line Company introduced the 333 series of fly line- billed as “the unsinkable line” - that was the first to use poly vinyl chloride (PVC) as a thin coating over braided nylon, a major improvement over oil based lines. The coming decades brought even more innovation to the fly line and Chandler kept Cortland at the forefront of the forever-changing technological landscape of core materials, weights, and temperature ratings. His business acumen and marketing expertise led to his involvement with the American Fishing Tackle Manufacturers Association (AFTMA), serving as its president for two years. Leon Chandler was also active in the conservation community as well, serving as President of Trout Unlimited for two years and another 22 on its Board of Directors. In 1988 he was elected to the Freshwater Hall of Fame and received the Dolphin Award, one of the highest honors in sport fishing.  In 1992, after over fifty years with one company, Chandler retired from Cortland Line. Not one to sit around, Chandler bought a motor home and fished his way across the country. Between trips and popping in at Cortland from time to time, the mobile always seemed to return to a familiar locale on the Missouri River, one of Leon Chandler’s favorite fishing spots that he enjoyed floating with sons Kim and Jeff as well as his grandsons.  Leon passed away in 2004 at the age of 81.  Leon couldn’t always be seen actually fishing on the Missouri as he seemed to spend more time on the bank carefully watching for a rising fish before starting the stalk.  Leon adopted the quote from baseball great Yogi Berra, “You can observe a lot just by watching” and this photo is a classic example of Leon on the river bank doing just that.

Leon Chandler could cast a fly just as gracefully and as far as some of the other legends of the sport and could have promoted his personal brand as others did in the industry, but he was truly in it for the experience. He appreciated the great opportunities that his life in fly fishing afforded him, the places that it took him, and the company of the people it introduced him to. Being able to cast in the backdrop of New York City lights, behind the Iron Curtain, and in Japan was enough for Leon Chandler. He was a phenomenal teacher as well, to the point where Field & Stream Magazine called him fly fishing’s “Johnny Appleseed” on account of the diverse group of people he touched in all of his travels around the globe. When he showed up at each demonstration in a foreign land, he took the look of amazement on people’s faces that had not seen a fly rod, much less the art a man can create with it, and turned it into look of joy when they got to experience and learn it themselves. Chandler was especially big news in Japan where he was a bigger celebrity than in the U.S. and his image and lessons continue to be used to influence the fishing culture there.  In the early 1970’s, fly fishermen in Japan were few in numbers.  As a direct result of Leon’s clinics and casting demonstrations, fly fishing in Japan is now common place. One student in a clinic was Shin Hongo a famous Japanese sculptor pictured here with Leon and his wife Margaret. 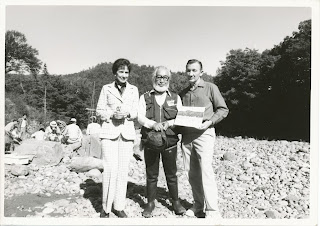 At home in the US, Leon was called upon for advice from such notorieties as Mickey Mantle, Ted Williams, Jimmy Carter, Merlin Olson, Ben Johnson, Bobby Bare and Ernest Gallo. 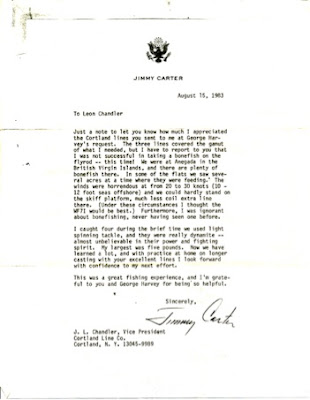 A letter from President Jimmy Carter

Leon’s son, Kim Chandler, tells a story of how his father, his brother Jeff, and himself walked into a fly shop in Craig, Montana and noticed two Japanese men getting outfitted with gear. Once the two men took notice of Leon, they rushed over and were so excited it was as if they had met the President of the United States. They insisted on having their picture taken with Leon.  Kim also told a story of how, when Leon was traveling out of his motor home and fishing on the Missouri River, he accidentally snagged an entire length of line with a fish still attached to it. What’s more is that he recognized it as Cortland 444 and, after setting the fish free, he took the line to a local fly shop and told them to ask around if someone was missing their fly line, leaving his contact information. Surely enough, Leon received a call a couple months later from a gentleman in New York whom the fly line belonged to, Chandler met up with him and gave him a tour of the Cortland factory. This story epitomizes Leon Chandler- he enjoyed his travels abroad and was awestruck by the fact that he was so lucky to enjoy that part of it, but he could also make an adventure out of something as ordinary as snagging someone’s fly line. Most anglers would have left the line, kept it for themselves, or set it in the trash, but Chandler saw it as an opportunity to find the person that it belonged to, sharing his experience and making a complete stranger’s day.


*all images courtesy of Kim Chandler
Posted by Unknown at 10:30 AM